Author Dan Lyons was the Technology Editor at the esteemed Newsweek magazine for years when at 51 he was unexpectedly shown the door.

He’d seen the writing on the wall as colleagues around the U.S. were laid off, but he’d rather naively figured the mag would always need a technology reporter as long as it remained in business.

Instead, he became that guy on the cover of his own magazine – The Beached White Male.

Supported by an image of a middle-aged white guy in a suit, soaking wet, face down on a beach at the water’s edge, the famous 2011 story described a whole generation of emasculated corporate high-flyers now shuffling around in their bath-robes, psychologically destroyed by the global financial crisis.

In the new economy, age 50 is the new 65, surmises an increasingly desperate Dan.

The only solution, he decides, is to join the very industry he’d been writing about for all those relatively lowly-paid years.

Hoping to cash in on the looming stock market launch of Boston start-up HubSpot, which flogs marketing and sales software, Dan takes a job in the vague role of ‘marketing fellow’.

But it soon becomes apparent to Dan that he’s quite possibly made the worst career decision of his life.

On his first day no one knows who he is, or why he’s there, and he’s surrounded by colleagues less than half his age speaking in acronyms and spewing forth company slogans ad nauseam. 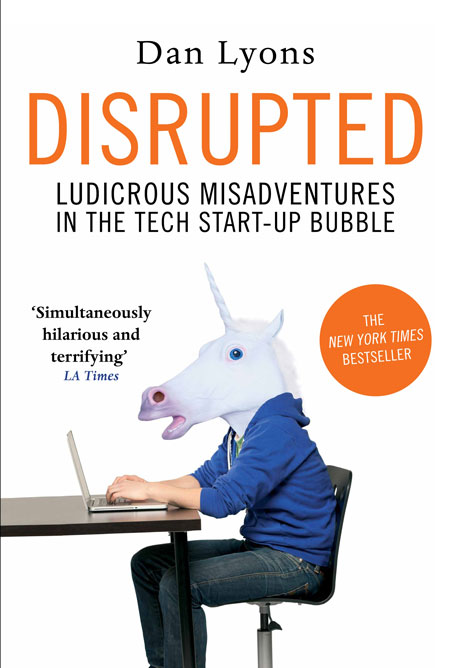 You don’t have to love ‘Silicon Valley’ tech culture to fall in love with Disrupted: Ludicrous Misadventures In The Tech Start-Up Bubble, Dan’s hilarious exposé of what comes next.

As he bides his time until cashing in his stock options, Dan dishes on everything and anyone that crosses his path: the CEO who brings a teddy bear to meetings, the Google-like décor of foosball and ping-pong tables, and the ubiquitous orange company logo with bulbous tips that looks like “three little orange dicks”.

For anyone who has found themselves trying to understand the mindset of a Gen Y colleague, or feeling that they’re the only ones in the room who haven’t “drunk the Kool-Aid” [one of Dan’s favourite idioms], Disrupted lets you know that you’re not alone.

Granted, as clearly the ‘smartest guy in the room’ Dan isn’t the most likeable narrator at times, nor are you necessarily rooting for him to survive unit the IPO payday.

But he makes no apologies for his mercenary reasons for being at HubSpot, which incidentally, is still trading strongly today, despite the scandal the book incited.