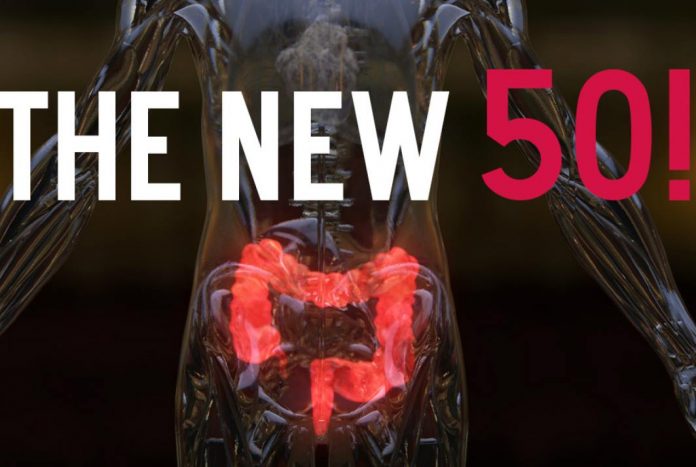 The report calls for the extension of the National Bowel Cancer Screening Program (NBCSP) to include people aged 45-74 (currently 50-74) to provide protection to an additional two million Australians, helping to reduce bowel cancer deaths.

“A widening of the screening program beginning at age 45 would bring around 2 million extra Australians into the safety net of this program, reducing mortality from bowel cancer and preventing family trauma in a relatively young life-cycle stage,” said Bernard.

“Looking at historic and projected mortality rates, it is evident that bowel cancer is a major threat to the 45-49 age group.”

The report shows a 72% spike in bowel cancer detection rates (in Australia) between the ages of 49 and 50, with 45% of cancers diagnosed at an advanced stage, which suggests undetected cancers in the late 40s population.

“Of the top 10 cancers, bowel cancer is the only cancer to show an increase in mortality rates from 2008 to 2018 and projected to 2021 in the 45-49 cohort. It is also the cancer that responds best to the kind of early detection offered by a screening program,” he said.

Developed by The Demographics Group and commissioned by Bowel Cancer Australia, the Protecting nine million Australians: the case for screening from age 45 report examines the growing impact of bowel cancer in people under 50 and the benefits of lowering the screening age.

Its release coincides with the recent October recommendation from the United States Preventive Services Task Force (USPSTF) for screening to start at age 45.

The report also reveals the mortality rates for those aged 25-34 who are not aware of the risks of bowel cancer and would benefit from a ‘millennial’ education and awareness campaign to combat the late detection of the disease.

“The leap in the bowel cancer deaths in those aged 30-34 over the last decade is especially worrying. Many millennials were enraged by my (satirical) comments about smashed avocado.

“I am hoping that by listening to what I have to say this time around, they will experience better health outcomes via the early detection of bowel cancer,” said Bernard.

After 10 months of aggressive treatment, including surgery and chemotherapy, the Melbourne-based mother-of-two believes many people could be saved from such a brutal ordeal.

“The fact there is this simple test available that can detect bowel cancer in its earliest stages, well before you even experience symptoms, means it’s absolutely essential the screening age is lowered,” said Lucie.

“I’m very lucky to have survived and recovered well but I wouldn’t want anyone else to experience the horrendous battle I endured, a precarious fight that many tragically don’t win.”

“I was in pain yet misdiagnosed for many months, so my view is if a younger patient has abdominal symptoms GPs should consider bowel cancer as a cause and not hesitate to prescribe a colonoscopy.”

“Given rising rates of bowel cancer in younger Australians, a lower start-age for screening should be part of the solution, along with improved symptom awareness for millennials and their GPs,” he said.

More than half of new cases diagnosed were at an advanced stage when the cancer is harder to treat and survival rates low.

Bowel cancer can be successfully treated in almost 99 percent of cases if detected at its earliest stage, however, fewer than 50 percent are.

“In 2018, the American Cancer Society called for screening to start at 45 given the rising rates in younger people and we welcome the October 2020 recommendation from the US Preventive Services Task Force,” Julien said.

“We need to be equally as bold and start screening people from age 45, while also increasing participation rates for those aged over 50.”

Medical guidelines state screening from 45 is potentially cost-effective, would reduce the number of bowel cancer cases and deaths, and increase demand for colonoscopy services, depending on participation.