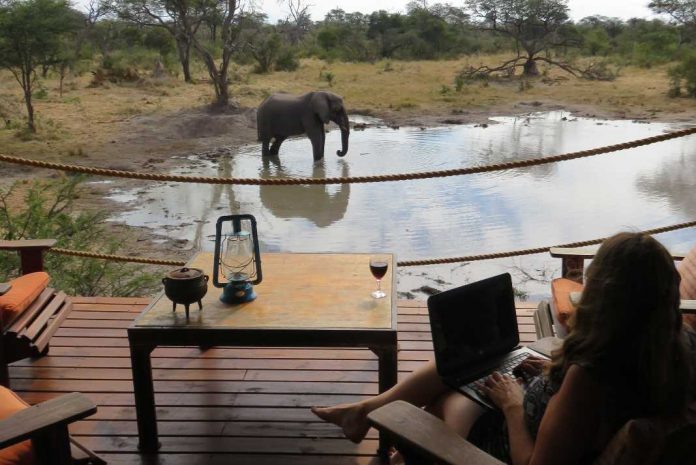 One month they are sunning themselves in the Caribbean playground of Barbados, the next sipping wine at sunset as they watch wild elephants and hippos from their Botswana deck.

But Ian Usher, 54, and Vanessa Anderson, 55, pictured below, aren’t retired millionaires with money to burn and a private jet at their beck and call – far from it.

They are just two of the growing number of everyday couples, singles and families tapping into the bountiful free benefits of house sitting, via sites such as TrustedHousesitters.com.

For a nominal annual fee, the website matches people such Ian and Vanessa with those looking to have their home and their pet(s) looked after while they too go on holiday.

This free accommodation is available in more than 140 countries, with thousands of Australian home and pet owners on TrustedHousesitters’ books. No money changes hands as the sitters do this in exchange for a retreat and the company of a pet. It’s a win-win for pet lovers.

“We’re pretty evangelical about it as a lifestyle possibility,” says Ian, on the phone to 50 So What around more pet-sitting duties in Perth.

“It ticks a lot of boxes for us; there’s no looking back. We’re completely sold up now – no ties, no bills, no rentals.

“It’s amazing how free you feel when you finally get rid of everything and you just live on the road.”

Since they began house sitting together in May 2014, these global nomads estimate they’ve sat in a total of 30 homes around the world, which aside from the above destinations, include Mexico, Panama, Nicaragua, UK, and minding a boutique resort (sans guests) in Fiji.

More often, than not, there’s an almost seamless transition from one exotic locale to the next, but Ian and Vanessa also like to schedule their own adventures in between housesits.

Last year, for example, they squeezed in a month in bucket list Cuba and in March this year they’re off to Thailand to train for offshore sailing certificates.

They fund their endless adventures by teaching English online for a Chinese company.

But the savings they make on accommodation means they only need to work 30 hours a month each – translating to a combined total of around A$2500 – to fund their incidentals, such as flights and food.

“Unless you’re a millionaire, I can’t imagine a lifestyle that’s better than this,” adds Ian, who also extols the virtues of house sitting as co-publisher with Vanessa of House Sitting magazine and in their online ‘how to’ video series.

The fulltime travellers readily admit they are at the extreme end of the house sitting spectrum; they have no children to tie them down, and have eschewed all the usual trappings to live what they like to call an ‘unlimited life’.

Yet, Vanessa is also keen to point out that there are housesits out there for everyone, regardless of age, relationships, commitments and preferred length of stay.

“There’s a house-sit for everyone and a house sitter for every home owner,” she believes.

“There a lot of Baby Boomers, and our generation, who are thinking, ‘wow, this is a good way to be travelling around the world, and living in cultures, not just going on holiday’.”

“We’re semi-retired, but we did it at 50 and I never would have dreamed that would have been possible, and it’s only been made possible because of of the savings we make through house-sitting and not having to pay for accommodation.”

But don’t they miss having a place to call their own home; opening a wardrobe or draw containing their own clothes and not a stranger’s possessions?

Is that way of life really any more secure than the one they have now? counters Ian.

British-born Ian, an outdoor education teacher in an earlier incarnation, started down that traditional path when he emigrated to Perth in 2000 with his English wife.

But after she left him six years later, Ian’s world has never been the same.

He sold his life on ebay in 2008 – house, job, car and even his friends – which inspired a two-year bucket list adventure of 100 goals in 100 weeks, a self-penned book, world-wide media attention and a movie-rights deal with Disney.

The film option may be gathering dust in a Hollywood file cabinet somewhere – Ian fancies Ewan McGregor to play him if it does see the light of day – but the money and fanfare set him on an irreversible course.

He used a chunk of the deal to buy his own island in Panama and build his dream Robinson Crusoe home.

Ian has since sold the island escape to fund his next adventure, but it was there that his love for Vanessa blossomed. They’d met through a mutual friend in London in 2013 shortly after her own marriage ended.

Emails were exchanged, Vanessa came out to Panama for a short holiday a couple of months later and hasn’t been back to the rat race since.

“We were talking about stress that people have to deal with, and one hour driving in city traffic convinces you that what we have is pretty good,” says Vanessa.

“Someone also commented the other day about how young we looked, and I think that’s part of it [their lifestyle].

“We’ve given up work at 50, essentially, with very few worries and it’s amazing how that impacts in terms of longevity.”