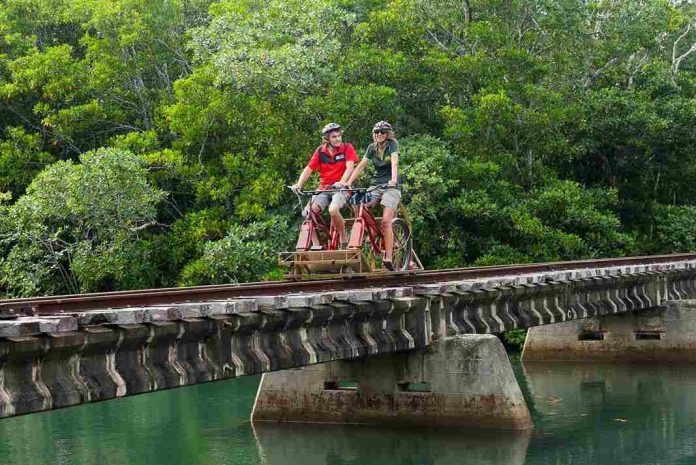 A short squeeze of the throttle to get us started and we’re off, doggedly pedalling to keep sight of the five pairings tearing up the track ahead.

We’re on rail-mounted electric assisted pushbike carriages (aka Velocipedes), the ingenious invention of inspiring Kiwi couple Howie de Vries, 56, and his wife Mandy Heron, 52, who came to Fiji to help friends with their jet-boat company and loved the lifestyle here so much they quit the corporate life at home for the ultimate seachange.

But more on them later; we have happy hour cocktails and breakfast buffets from our stay at the Sheraton Hotel in Denarau to burn off.

The half-day tour with Howie and Mandy’s Ecotrax, the ‘world’s first electric rail-riders’, takes us on a breathtaking 11.5km out-and-back tour through a disused section of the old Coral Coast sugar cane track near the Sigatoka township and the Shangri-La Fijian Resort on Yanuca Island.

That may sound like a lot of exertion in the Fijian heat, especially for those who haven’t cycled much of late, but that’s where train geek Howie’s solar panelled battery packs come in.

You can pedal as much, or as little as you like, and not even break a sweat as you reach the designated speed limit of 20km/h. You could even tag in a third member of the party to have a go, if you have one; each bike comes with an extra non-pedalling seat on the back.

The only mandatory movements are the hand signals we all dutifully follow from our exuberant guides Palu and Dolly; a gentle pumping action with one out-stretched arm when slowly down to 12km/h over the bridges, crossings, and through villages and the universal L-shaped arm-sign for coming to a complete halt.

With so many distractions along the way it’s also imperative that you save the photo editing and reviewing until the end and follow these to the letter.

Livestock grazes everywhere, often untethered, and all manner of wildlife can wander into your path without a moment’s notice.

But it’s through the two villages we encounter twice that the distracted rail riders can really come a cropper if they’re not watching those on the bikes ahead.

Although the Ecotrax groups ride through here twice-daily, excited children run towards us from all directions, eager to high-five five and embrace as though we’re the first tourists they’ve ever seen.

It really is something quite special; worth the ticket price alone, if you ask us.

At a designated stop, one of our group dolls out much-appreciated gifts – lollies and school books – but they’re not compulsory, and far from expected.

One exuberant youngster suddenly appears by our side with only one thing on his wish-list – a bear-hug with my co-pilot and co-publisher Jo. It must have been those streaks of blonde hair poking out from her sun hat squashed under the cycling helment. Quite the fetching look.

A beach towel and your swimmers are also not obligatory, but you’ll be kicking yourself if you leave them at the resort.

Before the return leg we alight at the stunning Vunibua Beach for a cooling dip in the translucent lagoon – bliss – before scoffing down a bellyfull of well-earned fresh pineapple, banana, and coconut meat washed down by coconut water straight from the source.

On return to the saddle, miraculously our bikes have turned themselves around to face back the way we came with Jo and I now leading the pack rather than giving chase.

By going easy on the battery-pack juice on the outward leg we also have plenty of power left in the tank so the return is relatively effortless, and affords us more time to load up on pics, video and to soak up the suprises that lurk around every corner.

Back at Ecotrax HQ, a converted shed once used for repairing sugar cane trains, Mandy hands each ‘cyclist’ a voucher for a free high-res souvenir pic of themselves on the ‘bike’ and shares the remarkable story of how their tropical gamble paid off when hit Australian TV reality series Bachelor in Paradise came calling early last year.

Ecotrax went from being just another pamphlet in the resort foyer to an overnight sensation.

“We opened in January last year and that episode aired in late April and we ended up with 20 minutes air time. Our website just went crazy,” says Mandy.

“Up to that point we just had our brochures in the hotels and I think people would just pick it up and go, oh, we don’t want to go cycling, it’s too hot. They didn’t really get it.

“But when they saw it on TV from that moment on it’s just gone mad, and we’ve been on Getaway and a few other things. That absolutely launched us.

“We didn’t expect it to take off quite so insanely. We turn away something like 60 people a day.”

The next phase is to extend the tour toward Sigatoka – the pair has a 10-year lease from the Fiji Sugar Corporation to use 28km of track – and after that a shorter exclusive excursion for guests of the five-star InterContinental Hotel in Natadola Bay.

Meanwhile, with all the set-up red-tape and back-breaking track clearing behind them, Howie and Mandy are loving the chance to give back to the Coral Coast community that has embraced them.

They make sure they pay their staff above average rates, employ village women to grow crops for the tour’s refreshment stop, are helping to fund the building of a new kindergarten and pay villagers $1 for every Ecotrax rider that pass through.

“We have the philosophy that just because you could do things cheaper, you shouldn’t. You’ve got to create that change.

“We’re living in their backyard after all, and it really is amazing. We could never go back to the corporate life we left behind now – we’re living the dream.”

50sowhat.com.au experienced Ecotrax and travelled to Fiji with the assistance of Tourism Fiji. 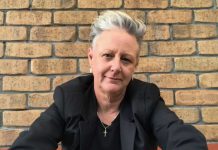 My new life as a late-blooming lesbian: I’m terrified to be honest, but really happy 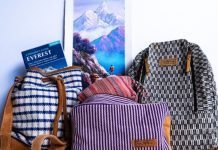 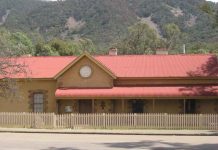 Ready for a tree change? This SA museum is looking for live-in caretakers