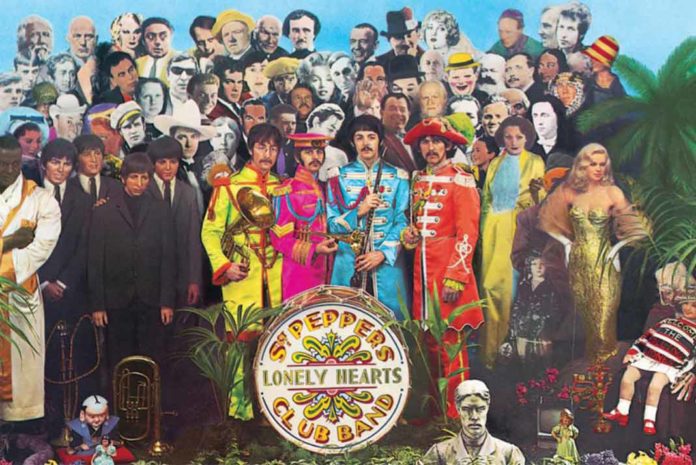 It’s made more ‘Best Album’ lists than most , and reportedly, one in five British households still have a vinyl copy 50 years after it was first released.

Much to the chagrin of legendary producer George Martin, say reports, record label EMI poached what John Lennon and Paul McCartney rated as their two best songs – Strawberry Fields Forever and Penny Lane – and released them instead as a double A-side single.

Now, to mark the 50th anniversary of its June 1, 1967 release, Apple Corps, The Beatles’ company, reports The Times, is reinstalling Strawberry Fields Forever and Penny Lane, just as the band intended.

“A couple months ago I was at Ringo’s home,” he writes.

“We were in his man cave watching TV, when a delivery from England came in. It was from Giles Martin, George Martins son. What’s this? It’s the Sgt. Pepper album remastered. I said, ‘I haven’t listened to this in I don’t know how long.’

“Ringo exclaimed, ‘You haven’t heard it in a long time? I haven’t listened to it in decades.’ So we decide to listen to it on his high def top of the line system. So here we are sitting on the sofa, facing the TV, muted, but with soap operas playing.

“We listened to every track together. I thought, this is a historically great moment. Sitting here with my friend, listening to Sgt. Pepper, that he’s on as a Beatle, and that he hasn’t listen to track by track, since it came out.

Although the songs were credited to both Beatles, Lennon wrote Strawberry Fields and McCartney wrote Penny Lane.

McCartney has told friends: “We were then moving away from screaming girls’ gigs where no one could hear anything in the concert halls any more and were working on Sgt Pepper.

“John wrote this absolutely amazing song, Strawberry Fields Forever, for the new album and I was frankly a bit jealous, so I went home and wrote Penny Lane. It worked and we wanted them as the main tracks on Sgt Pepper.”

The Beatles album, which also features hits When I’m Sixty-Four, With A Little Help From My Friends and Lucy in the Sky with Diamonds, sold 2.5 million copies in its first three months on sale in 1967.

As for that famous cover shot, the only figure the band liked who didn’t make the final version of the photo was Gandhi, because EMI record label executives worried that the depiction would be perceived as sacrilegious – so a palm frond replaced the image of him sitting under a palm tree.

The label was also worried that the celebrities would object to the use of their images on the cover and sue, so each celebrity was contacted for permission. The only one who didn’t give The Beatles the green-light was Leo Gorcey of the Bowery Boys, who wanted to be paid $500.