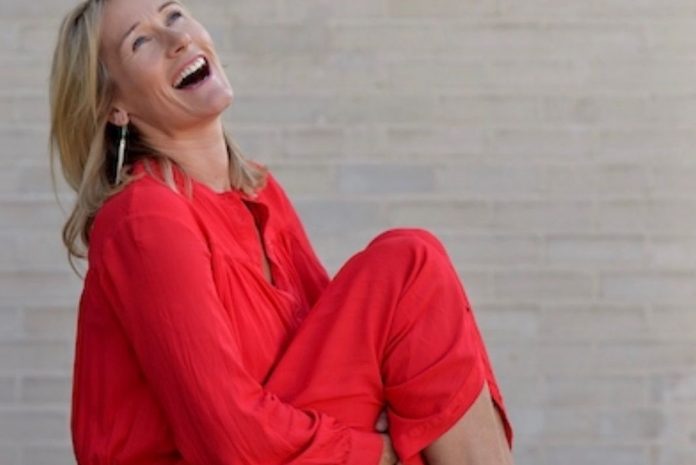 My name is Lucy Anderson, and I’m the founder of WooWoo — an all-natural fun and bold range of feminine health, self-care and pleasure products.

I originally developed the WooWoo brand in 2016 to help women feel more confident about their intimate health after reading an article about women being too embarrassed to go for smear tests.

Four years on, and I was surprised to find out that I had been having symptoms of perimenopause for two years, from the worrying boob lumps to brain fog causing me to put the milk in the cupboard with the teabags. I was convinced I was losing my mind and going mad.

I’m 46, and despite being ‘in the vagina business’ I will admit I was totally ignorant of the menopause. It was never discussed in my family or amongst my friends, and certainly totally off the table in sex-ed classes at school.

I thought that the menopause was when periods stopped and hot flushes started, then after a few years of misery you lived out your life in a period-free bliss channelling Kristin Scott Thomas in Fleabag. I had never heard of the perimenopause, or its bizarre range of symptoms.

My experience of perimenopause

There are 34 recognised symptoms of perimenopause but what has surprised me the most is that I only had one relating to ‘down there’; irregular, completely unpredictable periods.

Lumps in my boobs were the first sign, although I didn’t know it at the time. I went to see my GP as I found three lumps in my right boob. My female GP examined me, found five lumps and promptly referred me for an urgent mammogram.

At the hospital, they were amazing. The doctor explained that sore boobs and water retention (almost like being pregnant) are symptoms of perimenopause. So why had my GP not suggested this as an option for a woman of my age? Don’t get me wrong, I’m so glad that I had the mammogram otherwise I would have been forever doubting her diagnosis. Yet I also found it shocking that perimenopause wasn’t even an option floated by my family doctor in the first place.

The rest of my symptoms were mainly in my head. I wasn’t sleeping. I would switch between raging anger and general irritability (possibly related to not sleeping). My brain turned to mush. I kept forgetting why I had gone into a room. When I got there, I found myself standing staring at cupboards wondering what I was looking for. My mum has dementia and for a while I became convinced I was heading that way myself.

Following two years spending a small fortune on a truckload of nutritional and natural holistic aids such as menopause vitamins, herbal sleep aids and a starflower and flaxseed oil capsules, nothing was making a difference. I was exhausted and convinced that I was going mad. Enough was enough. I took the plunge and booked an appointment with a private doctor who specialised in menopause.

I plonked myself down in her comfy chair (very nearly falling asleep in the process) and told her about my lack of sleep, my anxiety and my added anxiety that I was going mad. I was mixing up my words, my friends and children had started to call me out on it. She listened patiently to my ramblings, then reassured me that those were the top three reasons for women coming to see her. It was normal. It was hormonal.

What saddened me in that moment is that meant that potentially millions of other women were going through the same horrible experience. How crazy/depressed do we have to get before we seek professional help?

Then I got angry. The reason that I hadn’t done anything sooner is because as a society we don’t talk about it, because there is still shame attached to aging and the menopause.

The doctor explained that the lack of sleep was due to reduced oestrogen. It means you wake up between sleep cycles and for those of us that are worriers, you find yourself in a vicious cycle of doom, as you start worrying about not being asleep, then before you know it the alarm goes off and you’re up for another day.

The anxiety, the brain fog along with a catalogue of other symptoms including increased UTI’s, and the headaches that I had been experiencing were all related to having lower levels of oestrogen.

With that all established the question was, what did I want to do about it? There seemed to be three clear choices:

I opted for route three with a programme of bio identical hormones derived from yams. This takes the form of a spray that I spritz on my arm once a day.

It’s the best decision I could ever have made.  I swear, I have slept every night through since I started my oestrogen spritzing. I’m no longer dreading the birds starting their dawn chorus as I don’t hear it.  I’m fast asleep.

Six months on and I’m bouncing off the walls, going to the gym nearly everyday. I’m still eating a lot of chocolate as I’m addicted: not because I’m knackered and need the sugar rush to keep me awake for the school run at 4pm.

I also feel much happier in the knowledge that my brain is getting what it needs to keep functioning and my bones are retaining some density: hopefully it will help me live well into old age.

I’m lucky that I could afford and had access to a menopause doctor but I appreciate its not an option for everyone. I wanted to share my story as it is real, very real and there’s not enough conversation around it. I’m also lucky as with no family history of breast cancer there was very little if any risk, if anything it is a positive benefit. The choice is entirely yours.

Women just need to know that there are choices out there and they shouldn’t suffer in silence.

A cup a day helps keep hot flushes at bay