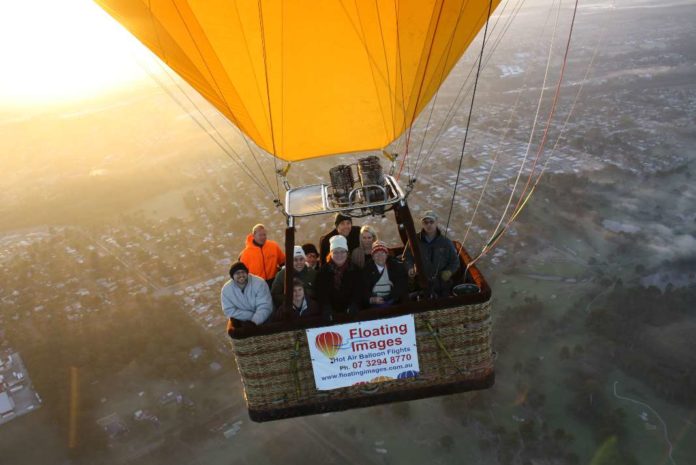 Maybe it was the 5.55am pick-up from the hotel lobby combined with the chilly Ipswich mid-winter air numbing our senses.

But before the reality of where we now find ourselves catches up with our coffee-starved brains, we’re already floating effortlessly upward in a wicker basket with eight other strangers.

Welcome to the serene, but surreal world of Floating Images, South East Queensland’s only balloon operator offering flights over the heritage city of Ipswich and the stunning Scenic Rim region.

Today, we’re taking off from Ivor Marsden cricket oval near the Amberley air force base, one of 20 launch sites that our trusty pilot Graeme Day uses, depending on the prevailing winds.

After pitching in with the set-up, signing our lives away, and a brief safety demo, we’re up, up, and away in a matter of minutes.

The basket is divided into sections; we share ours with a delightful couple who has driven five hours south from Bundaberg to celebrate her 40th.

Turns out she’s just as nervous about heights as I am, but at least her head isn’t as close to the burners, which only adds to my initial ‘Oh-shit-what-have-I-just-done’ anxiety.

It’s a totally irrational fear of course. I routinely strap myself into a steel fuselage at 30,000 feet, and sit back with in-flight movie and a beer without blinking an eye.

Yet, here I am suddenly edgy about floating peacefully skyward in the oldest form of human-carrying flight technology (the first successful manned flight was in 1783).

It’s all ridiculously safe, I keep telling myself as I focus on the horizon and the stunning sunrise over the Brisbane cityscape as a distraction. Wikipedia reassures me that not a lot can go wrong; the burner unit gasifies liquid propane, mixes it with air, and directs the flame and exhaust into the mouth of the balloon. The heated air inside the envelope makes it buoyant since it has a lower density than the colder air outside the balloon.

Sounds simple enough, but today it’s all about trusting Graeme who is about the best pilot you could find for this bucket list favourite.

For those relaxed enough to take it all in, he points out the landmarks in the distance, as he effortlessly juggles a million technical things we have no idea he’s doing at the same time.

We later learn over the package-inclusive breakfast back at the pick-up point, the Metro Hotel, that he was deciphering three different wind directions on the ascent to 2400 feet so he can steer us south in sync with his support driver below.

More comfortable with my new flight mode by the minute, I realise I’m now leaning forward in the basket, and standing a lot taller than I was watching the ground disappear beneath my feet on take-off.

It’s cool up here, but nothing a beanie and jacket can’t ward off, even in the middle of winter. The farms and animals drift by, and the roads are slowly filling up with early-morning commuters, oblivious to Graeme’s stress-free cubicle in the clouds.

You really do lose all sense of time as you drift tranquilly along in the breeze, leaving all your earthly worries below.

I’m enjoying it so much by the end that the last few moments of our hour flies by, and before you know it we’re dropping just as sedately as we began, 25km to the north.

Graeme has landing spots all over the district – no two flights are ever quite the same – and today the wind dictates that our basket in the sky floats to a gentle (and thankfully upright) final resting spot in a farmer’s paddock.

We all pitch in again to pack the balloon away in a bag that now seems impossibly small, and we’re on the road back to breakfast in Ipswich within minutes.

All the way back, I keep thinking, ‘Did I just really do that? I have to do it again!’