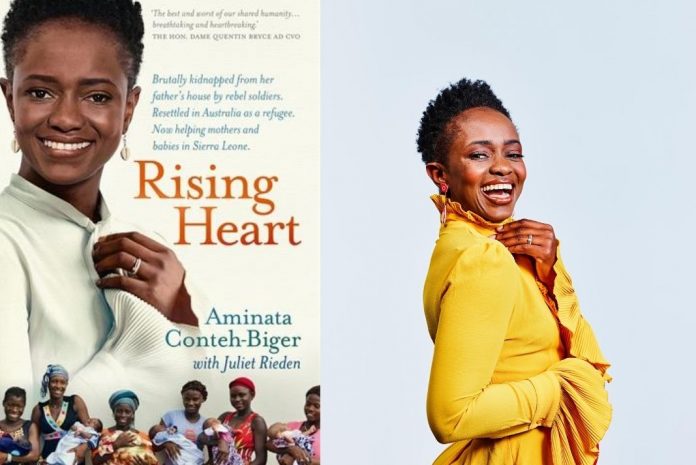 I was captivated from the moment I started until I finished Rising Heart. I literally couldn’t put this book down.

This is a compelling story of an incredible women, a survivor, who has more courage than most.

I couldn’t imagine going through and seeing what author and subject Aminata Conteh-Biger has seen! She truly is the embodiment of hope.

From Aminata’s early years in Sierra Leone, a country that I sadly knew very little about, a young girl with a strong bond with her father, to the horrific bloodshed of an 11-year civil war where unimaginable violence took place, to a 19-year-old coming to Australia, I couldn’t stop reading until the end, and I am sure you won’t be able to as well.

Here’s a sneak peak of what to expect from our book of the month.

One woman’s astonishing journey from unimaginable trauma to becoming a power for good.

In 1999, Sierra Leone was in the midst of a brutal civil war where mindless violence, vicious amputation and the rape of young enslaved women were the everyday weapons of bloody conflict.

It was also where rebel soldiers snatched the young Aminata Conteh-Biger from her father’s arms, then held her captive for months.

After she was released, the UNHCR recognised that her captors still posed a serious threat to her safety. So, still in her teens, she was put on a plane and flown to Australia to start afresh as a refugee in a land she knew nothing about.

It is here that she has proudly built a life, while never allowing her trauma to define her. Yet it was a near-death experience she suffered during the birth of her child that turned her attention to the women of Sierra Leone – where they are 200 times more likely to die while having a baby than in Australia.

So she set up the Aminata Maternal Foundation, then returned to the land of her birth to help.

This is her story. It’s a must read. I still can’t stop thinking about it.

You can buy your copy of the book here.

Aminata was born in Sierra Leone, growing up in Freetown. Following her kidnap, imprisonment and subsequent release by rebel soldiers during the 11-year civil war, Aminata became one of the first Sierra Leonean refugees to be settled in Australia.

She went on to become a wife and mother, alongside working in the fashion industry and as a performer in the acclaimed Baulkham Hills African Ladies Troupe stage production.

In 2014, Aminata started The Aminata Maternal Foundation in order to improve the health and wellbeing of women and children in Sierra Leone.

I have a guardian angel by my side. He saved me from a mugger!