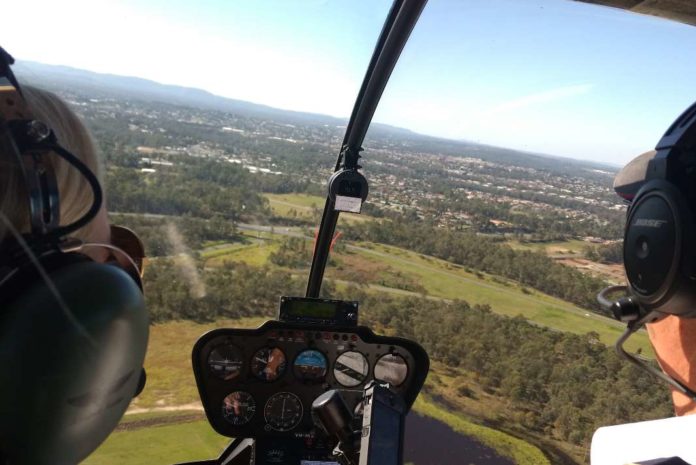 “Oh….My….God!”, shrieks my co-passenger through the headset as we take our first gravity-defying turn over the breathtaking Brisbane Valley in South-East Queensland.

To be fair, it was The Other Half’s first helicopter ride, and as a notoriously anxious flyer at the best of times, I was secretly surprised I’d even managed to coax her aboard. At least without a Valium, or two, as a persuader.

But we’re in exceptionally safe hands today with Captain Mike Jarvis of Pterodactyl Helicopters, a silver-tongued 15-year commercial pilot veteran, who would put any nervous Nellie at ease.

Seconds after take-off we are soaring over the dazzling Lake Manchester Dam, the majestic valley vista opens up, and calm is restored in the back seat as the epicurean wife realises the VIP’s favourite mode of transport may not be half bad after all.

“We build tours around cool things,” Captain Mike, a former software engineer, shares on the drive out to the helicopter, conveniently parked in his backyard, just 30 minutes north of our base at the Metro Hotel in the Ipswich CBD.

“The helicopter is just the glue that holds all those cool things together.”

Pub crawls, wine tours, weddings, surprise engagements, you name it, Mike and his expert team will tailor-make a tour for every budget and occasion. Although he has a stack of set flight options on his website, the customer-focused Mike estimates 90% of his business is now bespoke.

We buzz over the mighty Brisbane River and head south past Pine Mountain and around Sapling Pocket to land minutes later at Watercress Creek Olives and Limes, just 15km north of the Ipswich CBD.

We’re met by fourth-generation owners Bernard and Lorraine Mahon – Bernard’s Irish great-grandfather John and his wife Mary worked the land first as a dairy farm in 1862.

Today, the property is famous all over the Brisbane Valley and beyond for its 1200 olive trees (five variants in all), delicious figs and a further 600 Tahitian lime trees, the fruit from which ends up in Brisbane’s best restaurants and clubs.

Whether arriving by air, or road, you simply must stop here in April for the annual olive festival.

Thousands of foodies pour in to sample the Mahon’s famous wares, and to picnic to the sounds of live music under the shade of the many trees, including a 250-year-old pine, believed to be the region’s oldest.

A half-hour whistle-stop is way too brief, but we assuage our guilt at leaving such wonderful company so quickly with a bag of goodies from the Mahon’s well-stocked shop, including two jars of the to-die-for dried-figs in aged balsamic jam.

From there, Captain Mike whisks us west over the Brisbane Valley for a birds-eye orbit of the imposing Woodlands of Marburg, a historic mansion built in 1896, before turning south to the famous Ipswich motor racing precinct.

Petrol heads will know Queensland Raceway, aka ‘The Paperclip’, as the home of everything from the V8 Supercars to the Australian Superbike Championships.

But today, we’re the stars of the show as Mike noses us down for a 220kph reverse burst down the adjoining Willowbank Raceway drag strip. No chequered flag needed, thank-you very much.

Our final stop looms minutes later at the oldest vineyard in the Scenic Rim region, the stunning Ironbark Ridge in Purga, just a 15-minute drive south-west of Ipswich.

New owner Emma Chen and her equally welcoming dog Whisky greet us at the heli-pad, a mown patch in a paddock clearing near the tasting room.

Luckily for us a couple of punters sipping Ironbark’s signature Chardonnay, Shiraz and Grenache have also clocked our arrival – after all, half the fun of this pseudo-celebrity life is having someone acknowledge your mode of transport.

Emma, an optometrist by profession, and her partner Yang Zhang, a former Domino’s franchisee, have only been here for six months, but they’re clearly loving the tree-change.

A beaming Yang, 13kg lighter since leaving Domino’s behind, buzzes around on tasting duties, as the delightful Emma gives us a rundown on the operation.

She proudly points out the 1000 lavender plants nearby she sowed herself. Next to the enormous plot are the remnants of yesterday’s wedding, big business for Ironbark in this post-card perfect setting.

Wedding parties can even stay on-site in their spacious three-bedroom Airbnb.

We could stay all day in one of the most relaxing settings imaginable, but Captain Mike is on a schedule. A late lunch awaits at the newest hot-spot in downtown Ipswich, Dovetails Restaurant, washed down by one (or three) of the 72 brews on tap, at nearby Tap’d, a craft beer colossus which boasts the largest array of beer and cider under one roof in the Southern Hemisphere.

Until then, it seems I’ve been relegated to the rear of the helicopter for the short hop back to reality.

Who is this nonchalant stranger up front snapping shots on her Samsung while smiling from ear-to-ear?

She’s starting to look a little too comfortable up there!

Colleges Crossing Café. Over a celebrated turmeric latte and pure vanilla-sweetened cold-pressed coffee, we meet owner and Ipswich media identity Mike D’Arcy. He shares the stories of the two recent devastating floods to hit the region. The big one in 2011 closed Mike’s popular local haunt for two years. He’d only been open for a week when the second surge rolled down the Brisbane River to shutter the café again. Today, however, the picturesque riverside setting is a testament to Mike’s – and the community’s – resilience and the perfect way to start your day. Open seven days, 8.30am-4pm. Click here for more information.

Dovetails. The new fine-dining hotspot in Ipswich would hold its own against any distinguished metro rival. Located in the former woodworking room of the old TAFE college, Dovetails gets its name from an age-old joinery technique, and celebrates its unique history at every turn. The names of former students are carved in posts at the entrance, and prints of woodworking tools are strewn across the ceiling. General Manager Shaun Hunt, who also helms the neighbouring 4Hearts Brewing’s Pumpyard Bar & Brewery, is equally proud of the upstairs function room The Lord Lamington Suite, a nod to the former Queensland governor. He laid the foundation stone for the building in 1900, and is the man widely credited as the inspiration for Australia’s famous coconut-covered delicacy.