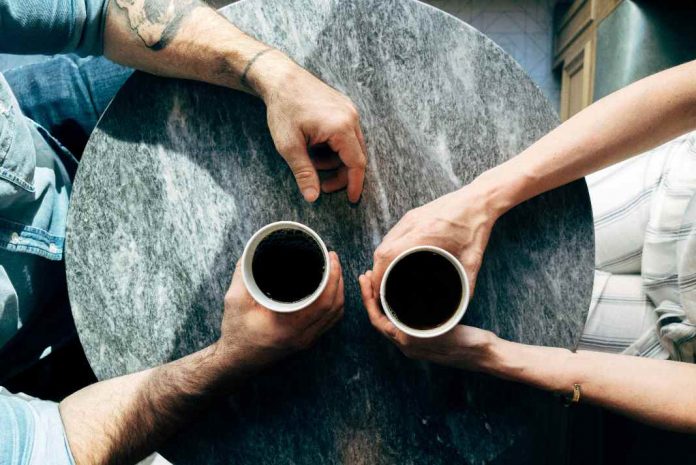 Dating in your 50s is anxiety producing enough, but even more so when you’re widowed.

There’s the feeling of guilt, the imagined emotional betrayal, and the worry about what friends and family will think.

Not to mention the fact, that for me, it had been 25 years since I dated or kissed anyone other than my late husband.

I attempted a brief foray into Internet dating after listening to advice from a well-meaning friend that was a complete disaster. I wasn’t ready.

What should have been flattering to have likes and emails asking if I could maybe meet for coffee or dinner sent me into palpitations, and not the hearts-a-fluttering kind. Pure panic attack would be more like it.

I couldn’t even bring myself to reply. So I decided being alone was just fine with me, I was blessed to have had a wonderful loving man in my life and didn’t need to have another, even as a dinner date.

But then something extraordinary happened which has left me feeling like I broke through that final barrier of self-imposed exile. I stepped out of my box and I feel lighter.

Time to take a chance

It happened quite out of the blue. I did practice my cough and hoarse voice to say I was too sick to go the day after I agreed, but then in a moment of bravado I decided it was now or never. It was time to stop being a social hermit.

On the day of the date, while waiting for the knock, my hands were sweating, I was cursing my sudden break with sanity, I reapplied my deodorant three times and looked out the window at least 10. What was I thinking? It was going to be a long few hours.

To my utter amazement I had the best 10 hours of the last four years. After the first hour of awkwardness on my part the next nine hours were great. We spent the whole day together just doing one thing after another. We just enjoyed each other’s company with no expectations.

When he said what should we do next, I totally dredged my brain for activities and interesting places. I had fun. Fun. I had started to think that was a dirty word.

And the good night kiss? I didn’t expect it so when asked if I minded I was a bit taken aback and slightly panicked. I just wish now I had actually relaxed so I could have enjoyed it more. Because it was good!

Did I feel guilty? Did I think this was the start of a relationship? Did I feel emotionally conflicted? That’s a big fat No, No, No.

I had fun, enjoyed a man’s company, had great conversation, and a tiny bit of intimacy. It was a four-year journey to get here, and I feel surprisingly normal. In fact, I feel like a woman again.