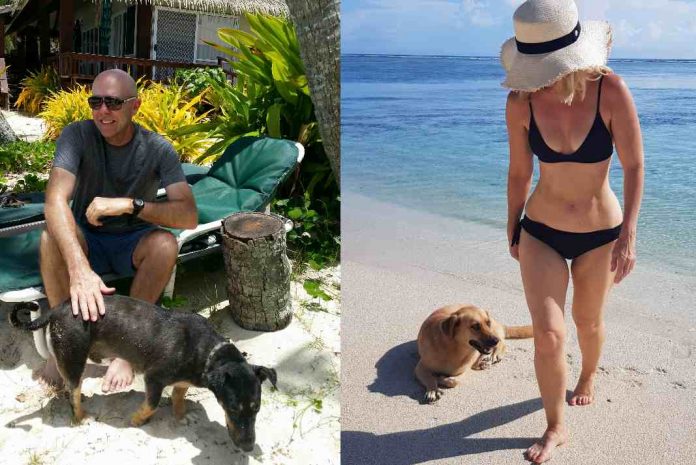 You could have knocked us over with a wet cocktail umbrella.

For there, at the top of one of Rarotonga’s highest peaks, Te Rua Manga (aka The Needle), was the very same stray dog who befriended us earlier in the week.

Defying improbable odds, the part-corgi, part god-knows-what, had somehow managed to propel those stumpy little twisted legs up a root-laden incline so steep we vowed to never touch another daiquiri in our lives as we scrambled, breathlessly, to the 413m summit.

The views atop this iconic peak suddenly took a back seat, as our befuddled brains tried to compute this dog’s staggering feat.

Her two-legged companions didn’t know this dog from Adam, but she’d latched on for the gut-busting climb as they started up the track on the northern side near the main town of Avarua.

When you also consider there are supposedly more than 4000 dogs on the most populated of the Cook Islands, a six-hour flight north-east from Sydney, you’ll understand why we were so flabbergasted to see her again, some 16km away from her usual haunt.

After sunning herself at our villa on the south-side of the island for a couple of days – and picking up the name Fergie for her penchant for toe-licking – we’d unwittingly palmed her off to another group of tourists near the island’s popular grocery hub, Wigmores.

Clearly now bored with our treats, whatever they were carrying held more intrigue, and promise, and with that, Fergie was gone.

Or so we thought!

Welcome to Rarotonga, a Pacific Island paradise where a myriad of cross-breds roam free with carefree abandon, dodging cars and the ubiquitous scooters and motorcycles as they idle from the lagoon to their favourite spot in the shade.

Many have large bodies and short little cabriole legs, thanks to a busy basset hound who was here in the 1990s, according to one report. One local legend will also have you believe that one of the Queen’s corgis got out during her state visit in 1974.

One thing is for sure, you won’t find anything like a Raro dog in the back of a Land Rover driving through Toorak or Mossman.

Unwitting holidaymakers can start their day with a casual stroll down the lagoon beach for a coffee at the nearby café or resort, and before you can say “Hello there boy, where did you come from?”, you’re back at your holiday house with a new friend for the week.

It happened to us again when we switched stays to a small beach house in the village of Titikaveka.

I gave another cute little corgi-cross a pat as I walked through the Moana Sands resort with my morning cappuccino, and next thing we know he was sprawled out on our deck-chair lounger at our rustic rental down the beach.

For the first couple of days, it was kinda cute to have Dudley – so named because he reminded us of a similar character on Sydney’s Northern Beaches – watching over us and protecting our home away from home. It also made us feel more connected with the island; a faux local, if you will.

But the gloss quickly rubbed off when, no doubt emboldened by the rapidly diminishing box of dog biscuits we’d stashed inside, he became aggressively territorial. Every unfamiliar dog or person to come in cooee of the villa was suddenly the target of a full-on barking barrage.

It got so embarrassing, we’d just hide in the bathroom until he ran out of steam, or the source of his sudden wrath ambled out of range.

The final straw came on the third morning when we laced up the runners for our 5km loop that took in a section of the island’s main 32km ring-road.

Despite the obvious arthritis in his crooked front leg, a besotted Dudley wouldn’t let us out of his site. Even the lure of a decoy biscuit to allow us a clean getaway wasn’t going to fool our Dudley.

What’s the problem with having a dog on a morning run? We hear you ask.

Nothing at all until a car, or truck, came into view, then he’d switch into full-on attack dog mode again and make a suicidal lunge for the rear tyres.

The only thing that saved us – and Dudley’s life presumably – was that 1.5km down the road, he recognised his old haunt from earlier in the week, veered right into the resort grounds and promptly vanished.

In case you’re thinking we heartlessly abandoned him at this point, you’re wrong. We did call out, once or twice, but figured he’d just wander back to our villa after he’d checked back in with mates and milked the new arrivals at the resort for whatever treats he could.

But that was the last time we saw him.

Maybe it was for the best, we tell each other to assuage the guilt. Some locals will tell you not to feed them at all for the very reasons we struck with our Dudley, or that some really do have legitimate owners just three doors away.

But try telling an animal lover to shoo away a dog who is clearly in need of a bowl of fresh water and nutrition, and sorry, you can’t tell these regular visitors to the Cooks that they all have owners when we know for a fact that the police go on shooting sprees when they feel the need to cull the numbers.

So, yes, our issues with Dudley aside, we will continue to feed them.

We’d like to think that most have developed such a sense of survival and feel for the natural comings-and-goings on the island, they soon learn to detach from us transients well before the suitcases are lugged out to the taxi.

In between times, they get a little love, food, and for the briefest of moments, a sense of belonging.

Every now and then there’s also a feel-good fairytale too; a bone fide stray gets to go home with a tourist.

One of the most high profile cases of adoption was the one by American Cathy Sue Ragan-Anunsen who became so enamoured with one stray it inspired her to establish the Cooks’ first vet centre, the Esther Honey Foundation in 1994, which has since been ursurped on the island by the excellent Te Are Manu Veterinary Clinic.

Check out their website wishlist for details on how you can donate to their cause and bolster their stocks of food and essential supplies. The island also has a long-established SPCA. Visit their Facebook page for more on the work they do and how you can help.

Yes, Fergie did get back safely from her summit of The Needle after last seen latching onto a new pair of hikers who were veering down the wrong track.

With tail wagging and seemingly no worse for wear after her epic climb, she was back doing what she does best; working the tables of ice-cream eaters outside Wigmores.