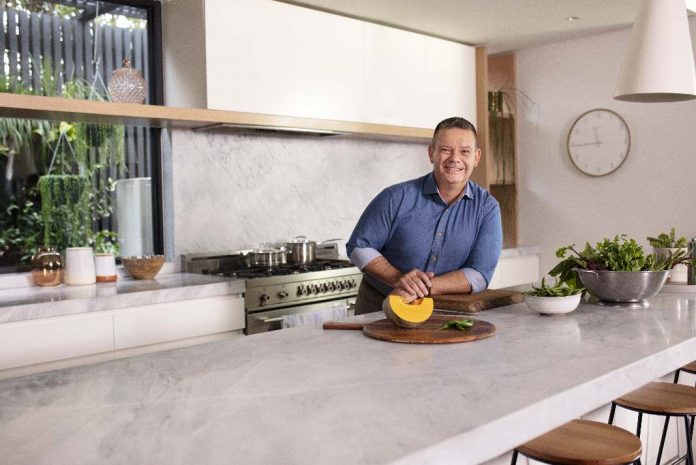 When the shirts started to fit a little too snugly MasterChef judge Gary Mehigan had always been one of those blokes who could drop 4-5kg in a hurry.

A boxing nut for as long as he can remember, the 51-year-old would simply lace up the gloves and sweat out all those fattening temptations his job routinely offered up.

The only problem was that a month after reclaiming that notch on the belt, the much-loved TV chef could almost guarantee that he’d be back where he started, or worse.

The turning point finally came for the frustrated foodie at the end of this year’s filming for MasterChef Australia when he tipped the scales at a sluggish 105.5kg.

“I was on the running machine and remember thinking, ‘this is never getting easier’,” he tells 50 So What at the official launch for his new ambassador role with WW, the company formerly known as Weight Watchers.

“I just felt heavy and slow, and the whole point of boxing is you’ve got to be light and fast. I just remember thinking I’m never going to get any better, and as I’m getting older, I’m only going to get slower.

“At the end of filming I just felt awful, I really didn’t feel that healthy at all. I went off and got some blood tests and the doctor said, ‘You know what, you’re okay, but it’s not great’.

“I walked away thinking to myself, ‘Okay, I’ve got a choice, I can spend the next 10 years becoming slower and a little more unhealthy, and probably prone to not enjoying life as much as I should do, and really once I hit 60 then life is different for me.

“I think there was just that point where I went [claps his hands], number one; I want to feel like I’m on the balls of my toes on this rowing machine, and number two, and it sounds, terrible, I’ve got 10 years where maybe I can actually feel really bloody good about myself, and I can keep doing all the things that I love; boxing, running, motorcycling, travelling, doing all that stuff and maintaining that balance.”

Although now 10kg lighter and with more energy than he’s had in his life, Gary admits at first he was dubious about whether WW was the answer to burying his yo-yo dieting habits once and for all.

Food after all is at the centre-point of everything he does; holidays, day-trips, lunches out, café catch-ups, you name it.

“So, my first question was, ‘Okay, is there anything that compromises in any way what I stand for in food: local, sustainable, fresh, clean, all the things that are really important’,” adds Gary, who is looking forward to losing a few more kilos over summer.

“I’m a foodie, so I want to know how many chickens are on the hectare before I buy my eggs, things like that. I’m not going to be forced to spruik products that I don’t believe in.

“But my wife, who has been on and off with Weight Watchers for a long-time told me I wasn’t paying attention. You really can eat anything you want.

“Then she gets all the cook books out. I’m a pro chef, why do I need to look at a WW magazine, that for me is very domestic, but now I’m starting to cook out of them and thinking, ‘this is quite delicious’.

“The other night she cooked chicken stuffed with ricotta and lemon and we had pumpkin and onions with it and said this is yum.

“So, there wasn’t anything that compromised it, and in fact completely the opposite.”

To prove his point, Gary dished up a sumptuous selection of dishes to showcase WW’s new holistic weight loss and wellness program, WW Freestyle, which uses the power of science and community to guide members towards eating better, moving more and shifting their mindset.

The menu sampled by 50 So What and other national media at the recent Sydney launch included a tataki of tuna, radish, edamame, white soy and sesame [amazing!], fish curry with blue eye, prawns, mustard and green chilli, poached free-range chicken, asparagus, peas and coriander chutney, grilled lamb loin with smoked eggplant and mint all washed down with mango ice cream with fresh lychees.

Surprisingly, the above delights hardly made a dent in WW’s patented point system, and even better, it curbed this writer’s appetite and sugar cravings for the rest of the day.

Gary said: “I chose WW Freestyle because I can still enjoy my favourite foods like crusty bread and cheese while getting healthier. I’m simply making small, healthy changes to my home recipes to help me reach my goals – like reducing excess oil and fat and building my meals around ZeroPoint foods such as seafood, skinless chicken breast, and fresh fruits and vegetables.”

Recognising the power of community at WW, Gary hopes that his WW journey can also inspire others.

“There’s a massive support network at WW which I’m proud and encouraged to be part of. I hope my journey with WW Freestyle shows others, including men like me, that you don’t have to put your life on hold or say no to the food you love in order to get healthier.”