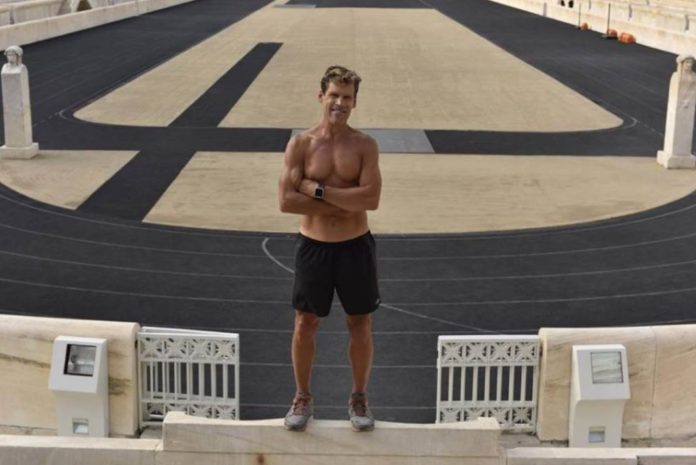 Despite becoming a millionaire by his late twenties, Dean Karnazes knew he needed some deeper meaning in his life.

The inner-angst finally spilled over on his 30th birthday when, fuelled by cheap tequila, he left a San Francisco bar, stripped to his silk boxers and started running – a mile to mark every vacuous year of his miserable life.

“I saw my life script written,” Dean tells The Times during promotion for his new book based on the Spartathlon, a 246km recreating Pheidippide’s journey in 490BC to seek help during the invading Persians.

“Am I going to be the guy who has affairs, is fat, bald and driving a Porsche at 50? Or am I going to really find some deeper meaning in life?”

Much like Forrest Gump, the ultra-marathon legend, now 54, hasn’t stopped running since – his next goal to run a marathon in every country in the world in one year.

“There is part of the struggle which makes life more enjoyable on the other side. We’re so comfortable we’re miserable, especially in the US,” says the man who estimates he’s now run more than 160,000km.

Here are a few more secrets to Dean’s incredible success.

“I just view training as life and life as training,” says Dean. For office work he has a stand-up desk and breaks for his high intensity interval training routine: Press-ups, pull-ups, sit-ups, burpees (repeat six times).

2. Work out while watching TV

During the ad breaks he does sets of burpees, sit-ups, push-ups, “or something”. “I just can’t sit there”.

3. Stay away from processed foods

Nothing packaged or refined, or any food that comes in a bag, no grain, wheat, oats or rice. His staples are: salad, fruit, cold-water fish, wild organic game and full-fat Greek yoghurt. His only vice? Chocolate-covered espresso beans.