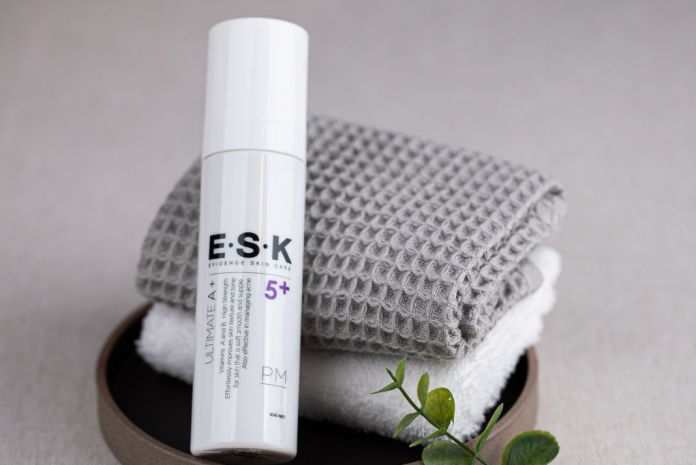 Okay, so you’ve all heard me banging on about vitamin A (it’s a not-negotiable in my skincare routine) and I’ve had so many DMs asking why I use it, so here’s the low-down.

I have been using vitamin A for about nine years, it has made a massive difference in the apparence of my skin, helped with the brown spots, texture and luminosity of my skin. It is important to me, to use products I know work, and this does.

Retinoids are a subset of vitamin A and some related compounds – the ingredients are admired for their ability to stimulate cell turnover and increase collagen production for fewer lines and wrinkles, smoother skin texture, and reduced acne and pustular rosacea

Vitamin A is not only proven to reverse the effects of intrinsic and extrinsic ageing (i.e. the natural ageing process and ageing associated with lifestyle factors such as unprotected UV exposure, respectively) it is widely viewed as the most effective ingredient for treating skin ageing and photodamage.

While retinol is the most commonly known retinoid and is available to consumers over the counter, its conversion to retinoic acid – the only true form of vitamin A proven to be effective transdermally – can often leave the skin feeling dry, irritated and red

In Australia, retinoic acid requires a prescription from a doctor therefore limiting its widespread availability. Other vitamin A derivatives such as retinol and retinal are available without a prescription both in-store and online

As retinol’s two-stage conversion process has been shown to be 20 times less potent than retinoic acid, scientific literature is now heralding retinal, retinol’s successor, as a more efficacious and better tolerated retinoid

Sometimes known as retinaldehyde, retinal is the third stage in the retinoic acid conversion process and performs closest to prescription retinoic acid at combating the physical signs of ageing

Converted by specialised enzymes that exist within the skin, retinal is more effective than any other form of non-prescription vitamin A and is ideal for most skin types, including sensitive, due to its high tolerability and minimal irritation

Retinal has been clinically proven to be the superior cosmeceutical retinoid when compared to retinol and retinyl esters; and was even concluded in one study to be equally as effective as prescription retinoic acid at reversing the effects of photoageing. Retinal has also been shown to be effective in managing acne and acne scarring and is the only form of vitamin A with anti-bacterial effect

Using retinal in their Ultimate A and Ultimate A+ night creams Evidence Skincare (ESK) is one of only a handful of brands to incorporate retinal and is (to our knowledge) the only brand in Australia which formulates its vitamin A products using only retinal.

So, who better to turn to than ESK Skincare founder Dr Ginni to answer a few of your most commonly asked questions.

What skin types (and conditions) will respond best to vitamin A?

Dr Ginni: All skin will benefit! Vitamin A is such a blockbuster ingredient and works a treat for older skin, sun damaged skin, pigmented skin, acne prone and even rosacea prone skin.

What age can someone incorporate vitamin A into their skincare regimen?

Dr Ginni: We have heaps of teens using vitamin A for their acne. The only people who can’t use vitamin A are pregnant women and breastfeeding.

Can you mix Vitamin A with other skincare ingredients?

Dr Ginni: Absolutely! In the case of Alpha Hydroxy Acids or AHAs, they make the vitamin A more powerful. As for the others, they can all be mixed. The usual exception is vitamin C. Because of its UV protective properties, vitamin C should be used in the morning after cleansing. It’s not that there’s a problem with using it at night but there’s no evidence for using it twice daily and its benefits are MOST pronounced from using it in the morning. And we only use vitamin A at night (see below) so they don’t tend to be used together.

Why should SPF be used in conjunction with vitamin A?

Dr Ginni: There is some data that vitamin A makes the skin more sensitive to the sun. Given that sun damage causes so many signs of aging in the skin, UV protection should be a part of your daily skincare routine regardless. Choose a broad spectrum sunscreen that is effective against both UVA (A for ageing) and B (B for burning) every single morning, 365 days a year.

What are the pros and cons of using prescription-grade vitamin A (retinoic acid) versus OTC options?

Dr Ginni: There is no doubt that prescription vitamin A (retinoic acid) has the most supporting evidence for ageing, pigmentation and acne, it can cause irritation and burning so lots of us simply can’t use it. Studies show that retinal (non-prescription) is equally effective to prescription retinoids minus the irritation. The evidence for retinol, which is most commonly found in over the counter skincare, is weak and it is often irritating too.

Should vitamin A be used morning or night?

Dr Ginni: Vitamin A should only ever be used at night. That’s because sunlight denatures vitamin A making it at best ineffective. It also causes short term photosensitivity making you more prone to sun damage.  Some studies have also shown that sunlight may form by-products in the skin that are toxic. So, it’s not recommended for morning use.

How long does it take for vitamin A to start working on the skin?

Dr Ginni: Studies vary but it will take around three weeks to start seeing changes. Continued use will see further changes. Some studies have shown continued changes after four years of use!

Are all vitamin A derivatives called retinoids? What is the best form according to science?

Dr Ginni: Retinoids are a group of topical medications that are derived from vitamin A. Prescription forms of retinoids include tretinoin, isotretinoin, adapalene (which is used for acne), tazarotene (no longer available in Australia) and alitretinoin (used to treat skin cancers related to HIV/AIDS). Non-prescription forms include retinal, as well as less effective forms such as retinol and retinyl palmitate.

The vitamin A I use is from ESK and is the Ulimate A+. You can check out their range here ESK

I hope the above has been helpful. Here’s to looking after our skin and using products that are effective, safe and that work.

Why regular exfoliation is a must for skin over 50