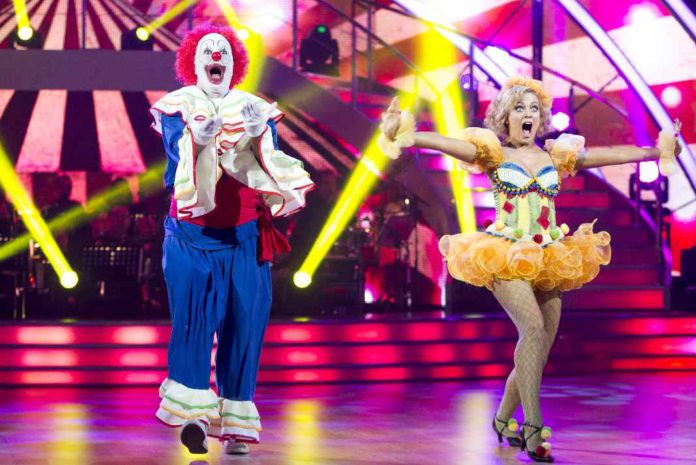 Former pop star and Australian Idol judge Mark Holden caused a national furore with his clown routine on Dancing With The Stars. Our exclusive book extract below explains what really went on behind the scenes…

September 2014 started out innocently enough with the release of the Holden Brothers Travelling Circus TV series and soundtrack on iTunes and rehearsals for Dancing with the Stars.

At first, the producers didn’t have a dance partner for me, so I was hooked up with last year’s winning pro-dancer, the fab Jess Raffa, who was at the time five months pregnant so could not compete that season. We had a ball and laughed and laughed. Belly a belly. I think we were about the same size – apparently, my gut is the same size as a five months pregnant woman. Not good.

Finally, they assigned me another Jess, Jess Prince who moved down from Sydney for the season. She is twenty-eight. I expressed my concern immediately to the producers that the sixty/twenty-eight age gap felt inappropriate to me. Princess Jess is not only a gorgeous young woman but, as I was to discover, also quite a brilliant young person as well. A master’s student of maths, she has a keen instinct for TV beyond her years. She also has a very strong sense of herself even in the face of the madness that was about to unfold.

Nonetheless, I felt there were only so many dances I would feel comfortable performing with a twenty-eight year old. Father/daughter type stuff – yes. Elegant waltzes – yes. Paso doble sexual dances – no.

Right from the start, I told them I was not comfortable playing the Geoffrey Edelsten role. Dame Helen Richey is such a fab example of the gorgeous older dancer, I suggested. Surely there was a woman my age out there who could dance with me. Then there are all sorts of other kinds of dances that can be interpreted and a deeper range of stories to tell, like the lovely Lynne McGranger did with Carmelo.

They were firm in their choice and there was no turning back at this late hour. Either by design or by the lack of an alternative from the producers’ point of view, Princess Jess was my partner. I think it was the latter. Jess was known to them and they correctly believed I would like her. On the other hand, if it was a choice, what was it they were choosing—a winter/spring thing? Tasteless.

Jess is a fabulous teacher and choreographer so it wasn’t an unhappy collaboration. She made it fun. I was moving a lot, everyday. Sweating up a storm.

Week three, we were clowns and the dance was jazz. The producers wanted to start out with the clown asleep, brought back to life by the beautiful young woman, then end asleep in an armchair again – what a sweet old man!

It was so patronising it infuriated me. I wanted to do traditional clown antics, so I sought the advice of Dominik Gasser from Silvers Circus, which was then performing at Richmond’s Burnley Oval. Dominik introduced me to Simon Tait, the ringmaster at Silvers. He was full of great ideas, which we evolved into the fart machine and the bucket of fake water to throw over the judges – classic clowning.

I had to stand my ground. Jess was caught betwixt and between but played it respectfully to both sides. On the other hand, I was quite blunt. If it’s between my ideas for the clown as an entertainment in the classic style and your idea of the sleepy old clown, I’m choosing my idea. If that’s rude, then I’m rude. 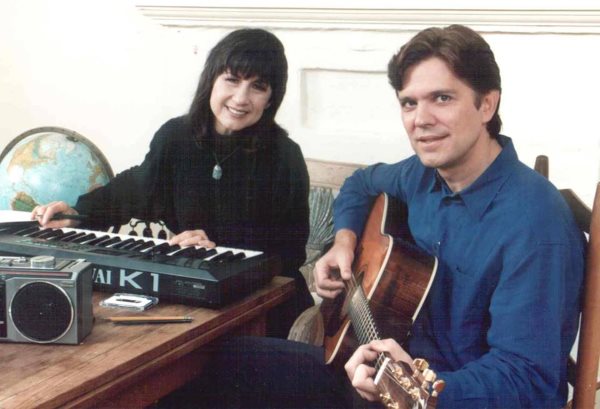 Simon rigged up a contraption with a pump in the clown costume pocket and a tube that exited out the backside of the costume. It was simple. Once loaded with self-raising flour it would produce two or three really glorious talcum explosions!

Jess choreographed a very funny skit. There’s a fab shot of Bobo and Jess from the night in which I’m fully one step behind her. I did my very best to keep up with her, but the gags she built in were tailor-made for the ageing, overweight, hopeless dancer. It was gold. We finished the romp by throwing a bucket of blue tinsel ‘water’ over the judges. It was a riot.

Then, during the post dance interview, unexpectedly, presenter Daniel MacPherson tried to shut down the clown and stop him from talking – a direction from the production? Bobo went off. It was wild! The clown wasn’t having it.

My plan for the fart gag had been to time it so that it went off as I turned my back and walked off after the judges’ comments. Then the aforementioned dialogue exploded. Dan tried to shut down the clown. When it got to the young bloke’s comments at the right end of the judges’ table, the one I mistakenly referred to as ‘Andy’, I couldn’t resist the temptation and let the pump rip. Out squirted the cloud. This anti-authoritarian act enraged the producers, Channel 7 and a good portion of the audience.

The next morning on the radio, I apologised on behalf of the clown, observing that farting during Andy’s judgment was regrettable. I noted that when a regular person farts on TV it’s invisible but when a clown farts, everyone can see it!

It seemed to me and my handful of cronies that the score was pre-arranged to make it impossible for me to continue on the show. I was becoming trouble with a capital T in Seven’s eyes.The audience vote from the week before got Jess and me through for a fourth week, which was a miracle in itself.

Every media outlet wanted a piece of the story. It was on the national news! Bobo was trending on Twitter, and the ratings were on an upward trajectory – it was exhilarating train-crash TV.

Social media went into meltdown. For every person who got the joke and thought it was refreshing to see someone cut through the bullshit, I’d say there were at least five others who’d decided I was a disgrace and disrespectful to the show. ‘I used to have your picture on my wall – now I think you’re disgusting.’

The deluge of hate was overwhelming. People wouldn’t say it to your face, but they can be quite vile from behind the safey of their pseudonyms. One blog used a shot of Daniel coming up to pat my stomach and make a joke about my fat belly, and insinuated that I was making an unwanted sexual advance on him. It was seriously defamatory, out of control.

My wife uses her maiden name online and was having a conversation with half a dozen women over many days that extended to pages and pages of text about whether or not I was deranged. So much time spent on an old geezer dressed as a clown having a laugh at himself on a reality dance program.

The day after the Bobo incident, the producers had one of their own follow me around. They definitely thought I was having a mental breakdown. In retrospect, perhaps I was.

Week four, I realised I was in trouble when the Channel 7 cab charges for the following week failed to arrive. Even after requesting them, none surfaced. There was never going to be a week five.

I was flying up to Brisbane for the presentation of the Blue September prize when four of the Dancing with the Stars producers met me in the Virgin Lounge for a powwow. They were petrified I was going to say or do something offensive. They wanted assurances from me and asked why I wouldn’t simply go along with them on their ideas. I explained that I did go along with their ideas when I agreed with them, but as a sixty-year-old man I wasn’t going to do a sexual dance with a twenty-eight-year-old woman in the post ‘Rolfie wants a cuddle’ world.

I told them that if I was forced to do that dance, I wanted to make it a parody. I was going to make a character that was so revolting there could be no sexual overtones. Hence Vladimir Putin was born. When I asked what offence I had made previously as Bobo, the best they could come up with was that I had said ‘pissed off’ (on a program screened after nine-thirty at night). I’ve never really been sure what my crime was.

The riff for my Vladimir Putin character was going to be ‘Look, I started out as Justin Bieber and ended up as Bert Newton’ – but Dan beat me to the line. I had asked Grant Rule to see if Dan or Toddles would do a ‘shirtfront’ with me as Putin – it was part of the national conversation at the time – but I should never have taken him into my confidence. He was always going to be a company man. I should have assumed consent and just done what I was committed to do and to hell with the consequences. I should have trusted myself, but the backlash was so severe I needed someone to talk to.

I let him in on my other ideas, should I be allowed to continue on the show, such as a contemporary dance where I did absolutely nothing, just stood completely still for the whole dance. It would be my finest dance move – stillness!

There was also a dance I wanted to do for my charity the Ice Factor, which engages young people at risk in low-economic high schools through ice hockey. I wanted to do a dance for youth suicide to honour the people in the program who had been affected by it, who included a young man who had lost his mother and a mum and dad who had lost their son, who support each other.

On the partner-swap week I wanted to dance with Carmelo. Why not a man dancing with a man? Men dance with men in many cultures. I wanted to do a waltz with a Zimmer frame. I wanted to send up the young ones with their injuries by having a twisted ankle then doing the jive in a moon boot. Boomers are not over yet, baby!

There were plenty of ideas that I ran by Grant. They were clearly not well received. The network wrote to tell me that the Seven hierarchy was unhappy with me at all levels of the company. I couldn’t get a guernsey to Melbourne Cup Day, no room at the inn all over again. There was room for Geoffrey and Gabi but not me.

When I was finally booted off, I made a tearful exit and oh what a commotion that caused. At least some part of this whole Dancing with the Stars episode was an act of desperation, raging against old age.

Edited extract from My Idol Years by Mark Holden (Transit Lounge $29.99), now available where all good books are sold and online at www.transitlounge.com.au 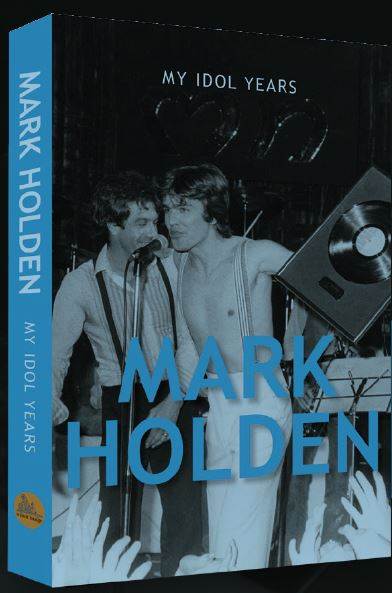