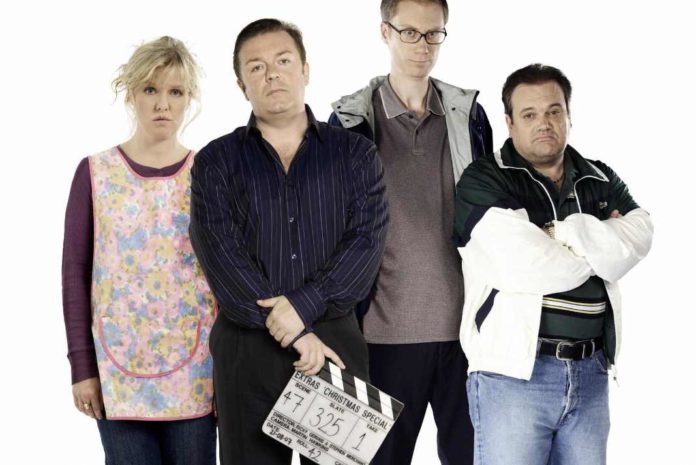 Home And Away Desperately Seeking Men Over-35 To Star As Extras, screams the headline in my community rag.

“Why on earth would you want to do that?” The Incredulous One retorts when I answer the call-up for background – aka extras – for the long-running soap.

For one, it sounded like a good undercover yarn for the site – but as the wife rolls around the living room in increasingly loud fits of laughter, I realise this is now a much more noble calling.

A lifetime ago, as a Los Angeles-based entertainment correspondent on the hunt for a quirky first-person feature, I’d tried out (unsuccessfully) for the first Pirates of the Caribbean movie, and successfully scored a day’s work on the early 2000’s TV hit Six Feet Under. This bald look was hot and I was cashing in.

As I fumbled to squeeze into inappropriately small prison-greens in a makeshift roadside changing room with 20 strangers, I realised I probably should have quit while I was still ahead.

A prisoner on set

We are here at Yasmar Training Facility in West Sydney to provide the background for Home And Away regular John Palmer’s [Shane Withington] brief stint behind bars while awaiting his fate on arson charges [the segment played earlier this year].

The facility is now devoid of real-life inmates and used as a corrections’ training facility instead, but we’re no sooner through the gates before being reminded of our lowly pecking order.

“No photos or you will be sent home,” barks an officious clipboard-wielding production staffer. Seems a few of my new colleagues didn’t take the notices warning against pics to heart.

Duly scolded, we’re herded into the yard to, well…wait. You do a lot of that as an extra. I’d forgotten how incredibly tedious the lowest rung in the acting world can be.

Ricky Gervais’s hapless career extra Andy Millman hauled himself out of obscurity to star in his own hit sit-com in Extras, but I have no life-changing script in my back pocket. My only salvation today will be the catering truck.

After an eternity of awkward conversation milling around with my colleagues – this job I quickly learn isn’t considered one of the more fun extra roles one can get (all guys, bad clothes, and claustrophobic location) – they’re ready for us to start earning our $25 per hour.

Two of the more beefier guys are plucked from a line-up to play ‘the heavies’ who help a featured actor threaten John in later scenes, and I finally get a respite in the shade for my first scene, in the prison visitors’ room.

Our production minder places us in chairs with our ‘loved one’ sitting opposite. Apparently, there are female extras here today after all, but only for four hours, rather than our commitment of 10.

Series regular Cornelia Frances, who plays lawyer Morag Bellingham, is seated at the next table, awaiting a chat with her client. I resist the urge to improv a scene with this TV legend and instead take my cue from my ‘prison wife’ who has clearly done this kind of thing more than me.

Later, a fellow extra tells me that the best thing to say while miming a scene is ‘rhubarb, rhubarb, rhubarb’ because it seems like you’re saying a whole lot more than you really are. For now, I mostly just nod with a sad, concerned look. The missus seems to have a lot on her mind today. [Note to movie/tv buffs: the ‘rhubarb’ trick is an actual British thing, but is usually spoken aloud by extras, out of sync, to create general background hubbub].

Lunch offers us another welcome reprieve from the tedium, and the food is really rather good.

There, as I chow down on more salmon than I really need, I meet a full-time extra in his late 30’s who is finding steady well-paid background work playing military/police types in films and TV.

I’m gob-smacked to hear the legend of the homeless guy plucked off the street to be Matthew McConaughey’s body double in Fool’s Gold (2008). Apparently, he earned $250,000, although I think I’m being had as the fool there.

The afternoon drags even slower. We mingle again in the yard for another scene as John is confronted by the father of a girl he killed.

Then more waiting, only relieved by shooting hoops. By now I’ve taken the lead from my fellow inmates and stashed my phone in my pocket – the rules are increasingly relaxed as the day drags on.

My hand shoots up instinctively when our minder barks for three more ‘volunteers’ for a scene inside. Anything to relieve the boredom after nine hours of suffering.

I’m planted in a phone box as John is confronted again, this time by a shank-wielding con hellbent on vengeance.

I watch the scene months later when it finally airs, my $200 net pay, long-since blown on watching classic prison movies.

But strangely, the roles have dried. I’m measured and photographed for a military type in the Pacific Rim movie sequel, but don’t hear back. I text YES to a background call-out for a Foxtel fight event, but again, radio silence.

After all these years, it seems you still need a healthy dose of brawn to match the bald, or you just don’t fit the tough-guy stereotype.

It’s probably for the best, the wife sensibly concludes: “That film script in the bottom draw isn’t going to write itself.”