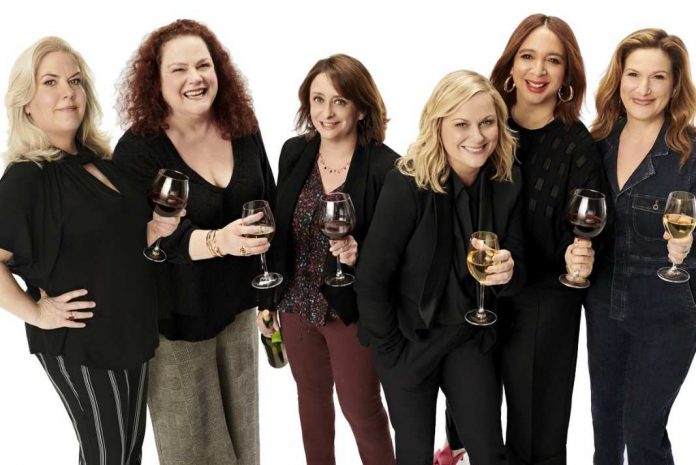 How to celebrate the perfect 50th?

It’s a question that we’re endlessly pondering and debating at 50 So What.

Bunker down in solitude with a few fortifying shots of your favourite drink, hoping it passes without too much trauma?

Or, get out that Bucket List and tick off those most adrenaline-fuelled goals you’ve been putting off?

With good pal Rebecca (Rachel Dratch) about to turn the Big Five-Oh! (they even have the T-shirts), Abby (Poehler) engineers a boozy group reunion bash in Napa Valley, California, for six long-time friends who decades earlier had worked together in the same pizzeria.

We know, right, this sounds like the kind of film that will inspire thousands of 49-year-olds with ideas on how to follow in their drunken footsteps.

It starts promisingly enough as we meet the party group. Rebecca is a therapist with a dead-beat husband; Naomi, played by the hilarious Maya Rudolph, is the stressed-out mum doing it all on her own; and Tiny Fey even pops in as she introduces the group to their holiday rental.

From there it all gets rather predictable and uneventful, we’re sorry to say.

They laugh, they drink, poke fun at millennials and the pomposity of wine tours, flirt and argue, all against the backdrop of the stunning Napa.

We’re not really sure what we’re supposed to learn from all this in the end, but it is good to see a group of middle-aged woman dominating the screen for a change.

If nothing else, the physical comedy is worth the effort too. We still had a smile on our face days later thinking about Naomi’s “little ditty” to Rebecca in a stuffy Napa piano bar.

Maybe we just needed an extra glass of Pinot Grigio to smooth out the off-notes.

Jo’s hormonal month in review: Was it too early to celebrate?

2020 wasn’t a complete disaster: Here’s what I learnt

The new face of travel: Stay safe in style