But with a catalogue like hers, packed with some of the most seminal movies of our generation, we thought you’d like to get a head start on the celebratory downloads.

Yes, the star of Pretty in Pink, The Breakfast Club and Sixteen Candles, to name just a few, blows out her 50th candle this weekend.

So where has our 80s teen crush been hiding all these years? In plain sight as it turns out. 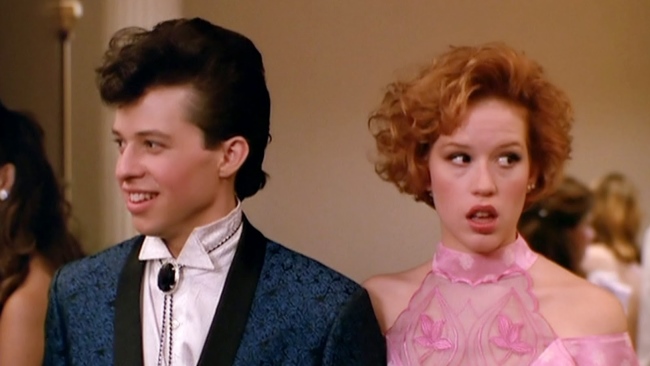 After a decade of being the most famous young actress on the planet, she turned down the lead in Pretty Woman, enjoyed a brief hiatus in Paris, and generally took a step back from the pressures of having her face plastered all over the covers of Time and Life.

Not that she’s had her feet up all this time – far from it. Although she’s never reached the same heights as she did when teaming with prolific hitmaker John Hughes in the 80s, Molly’s IMDb filmography page is as long as your arm.

Finding her new niche on the stage and small screen, Molly has barely stopped working, even around her 2002 divorce to French writer Valéry Lameignère, and subsequent birth of her three children with second husband, Greek-American writer/book editor Panio Gianopoulos.

More recently, she’s released a jazz record Except Sometimes, a nod to the influence of her father Bob, a blind jazz pianist, and landed a recurring role in Netflix series Riverdale.

Later this year you’ll also see her back on the big screen in the comedies The Kissing Booth, and All These Small Moments, and in the crime thriller Siberia, co-starring Keanu Reeves, 53.

Meanwhile, Molly has been making good use of her perennial celebrity status, keeping the #MeToo fires stoked with a distressing first person story of her experiences with Hollywood’s misogynists for the New Yorker.

And just today, on her Facebook page, she takes a swipe at the U.S. gun laws in the wake of the massacre in Florida in which 17 were killed by a deranged teen.

“I was filming in Australia in 1999 when the Columbine High School massacre happened,” Molly writes.

“My Australian friends told me how a bi-partisan law was passed after their own mass shooting in Port Arthur Tasmania in 1996. 21 years have passed since the law was changed and there has not been one major gun massacre.

“Suicides by guns down 65%. How many Columbines, Sandy Hooks, Las Vegas, Orlandos, and now Parklands are we going to have to endure before we get serious about comprehensive gun reform?

“My heart breaks for everyone who has lost someone they love from these horrible massacres.”